A FILM BY Richard Loncraine

A FILM BY Richard Loncraine

Synopsis / Credits Trailer Buy Now ITunes
An amiable comedy-drama that raises its curb appeal with fine casting of both the leads and the supports.
-Leslie Felperin, The Hollywood Reporter 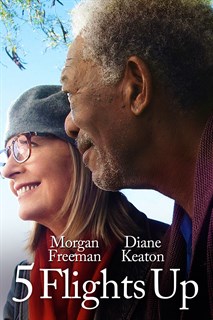 5 Flights Up is set over a weekend where a couple must decide whether or not to sell their Brooklyn walk up of 40 years. The story takes a comedic turn when the dynamic couple have to contend with eccentric open house guests, their pushy realtor niece, and the health of their beloved family dog - all while navigating a New York on edge from what turns out to be an media-generated terror threat.

FILMS RELATED TO 5 Flights Up