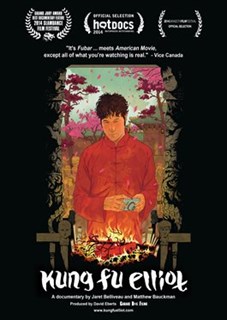 Elliot Scott plans on becoming Canada’s first action hero with his third low-budget action film, Blood Fight. This bizarre story spans two years in the life of Elliot, his supportive partner Linda Lum, and their cast and crew of outrageous dreamers striving to achieve success. As Linda tries to ground Elliot in reality and commit to their relationship he retreats further and further into his world of make-believe. Elliot sees himself as a moralistic hero; however, as Linda probes into Elliot’s impressive martial arts history, his Asian lineage, and his tragic past, she begins to unravel all of Elliot's tall tales. With everyone’s hopes and dreams pinned on Elliot, this film asks, “can you believe in your dreams too much before you end up living in a fantasy world?”